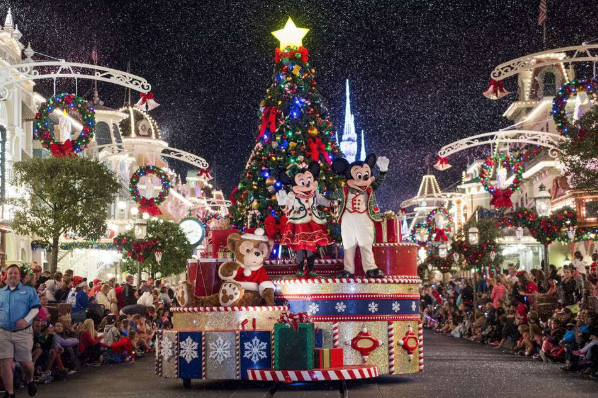 Starting on November 8th, Walt Disney World parks and hotels will kick off the winter holiday season with numerous events and promotions.

Mickey’s Very Merry Christmas Party will be held at the Magic Kingdom on select nights starting November 8. The Holiday Wishes fireworks spectacular as well as performances of “Mickey’s Once Upon a Christmastime Parade,” “A Totally Tomorrowland Christmas” and “Mickey’s Most Merriest Celebration” stage show will all be features of the after-hours party.

Over at Disney’s Hollywood Studios, there will be two holiday-themed shows in the evening. The Sunset Seasons Greetings will have new laser effects and state-of-the-art projection mapping, which will transform the Hollywood Tower Hotel into a winter wonderland. The nighttime show, “Jingle Bell, Jingle Bam!” will combine projection-mapping technology, fireworks, special effects and music. Santa Claus will be available for visits from November 10-December 24.

Epcot’s World Showplace pavilions will offer holiday treats from around the world at starting on November 18th. One of the most celebrated traditions at Epcot, the Candlelight Processional, will return from November 22-December 30.
Disney’s Animal Kingdom will offer a new program – the Indian holiday festival of lights known as Diwali. The new live show, “Up! A Great Bird Adventure,” will include Diwali in its presentation of the world’s most exotic birds, accompanied by the stars of the hit 2009 animated film “Up,” Russell and Dug.

Napa: 12 Days of Celebrating at Meadowood

If you’re contemplating on what to do this holiday season then look no further than Napa’s Meadowood located in St. Helena. A big perk and one that is famous and traditional is their annual Twelve Days of Christmas at their three-Michelin-star The Restaurant at Meadowood.

Expect international chefs such as Sota Atsumi and Dave Pynt as well as US-based chefs such as Christopher Kostow who also has three Michelin stars to join in the festivities. Each visiting chef will cook with Kostow to create delectable dinners. What makes these dinner series exceptional are the star quality of chefs who participate as well as the restaurant’s over-the-top kitchen.

Tickets benefit St. Helena Preschool for All and will help fund scholarships for young kids. Check out the lineup below:

While enjoying your West Coast visit, consider taking exceptional tours at vineyards such as Quintessa, Darioush, Far Neinte and Cakebread to name just a few. A visit to the area is not complete without a divine dinner at Thomas Keller’s French Laundry. Contact us for your complete food and wine travel experience.

Ready to start your next adventure!?